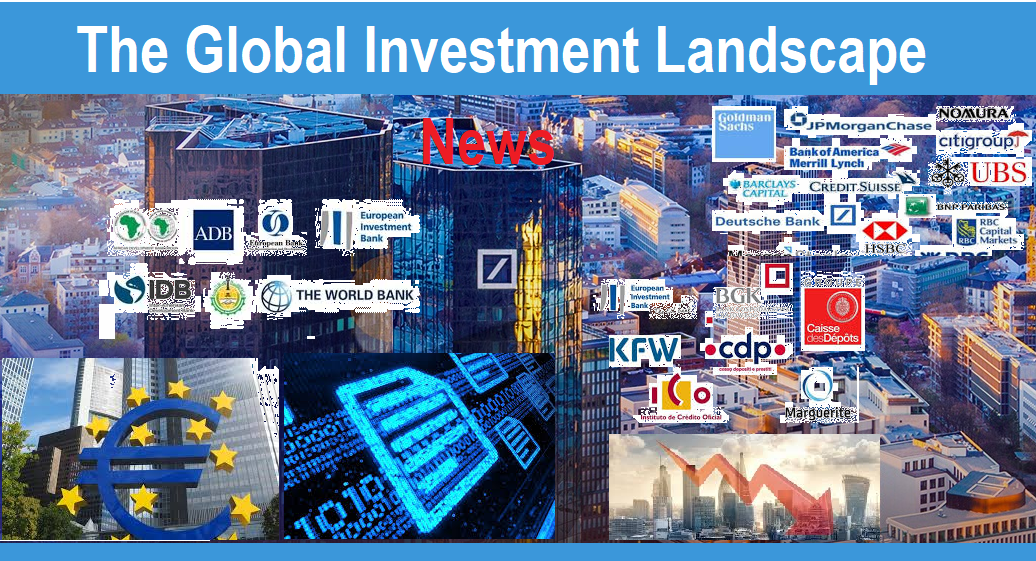 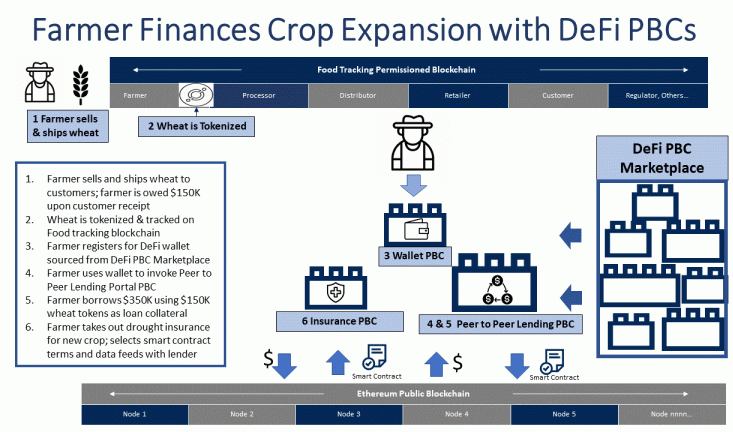 ISAAN Investment News - independant News reports
Note! we do NOT give any advice about Investments, Shares, Banks Trading
ANY action taken by our readers are on their own risk!


DeFi applications will go mainstream by 2022, assuming regulatory guidance is clear. DeFi modernizes financial system architectures, and brings innovative financial products to those who can't access them today.
What you Need to Know about Blockchain DeFinance
It turns out decentralized weather insurance, offered by Arbol working with Chainlink, is already commercially available. See Businesses and Farmers can now Hedge W eather Risk through Arbol and Chainlink
This offering validates a hypothetical example we used was of an unbanked farmer who could purchase DeFi drought insurance for a specific crop, and have the policy pay out automatically based on trusted rainfall data feeds. See Figure 1 below and Will Blockchain DeFi Go Mainstream? This scenario is not possible in traditional finance today - The unbanked farmer only wants to insure his own small portion of a large crop area owned by multiple farmers, and wants the insurance to kick in based on automated trusted rainfall feeds in his particular geography, rather than based on manual costly audits.
Risks
DeFi applications still come with plenty of risk, including smart contract code vulnerabilities, but many of these can be mitigated by buying decentralized smart contract insurance. There's also the lurking matter of unregulated activities that should potentially be regulated, especially since not all DeFi activities and products are decentralized, as pointed out in our research.
Regulators and law enforcement agencies are taking closer looks at cryptocurrency markets and could circle in on DeFi markets next. In fact, crypto traders were roiled today as CFTC and DOJ charged Bitmex executives with operating an unregistered trading platform, and violating multiple CFTC regulations and the Bank Secrecy Act. BitMEX is a large cryptocurrency derivatives platform with billions of dollars' worth of trading each day. See CFTC Press Release and DoJ Press Release
The Road Ahead to Mainstream Adoption
Aside from regulatory clarity, key to future mainstream blockchain success is widespread availability of dApps (decentralized applications) that talk to smart contracts that work on multiple blockchains. Users don't want to have to pick the winning blockchain platform, nor should they. Users want and need off the shelf applications that run where their customers and business partners are.
Chainlink's decentralized oracle system can be used to interface with smart contracts on numerous blockchains, so that users don't have to choose which backend blockchain protocol to work with. Settlemint also provides this type of interoperability with its low code development environment, smart contract templates, and multi-cloud multi-chain platform.
We expect many more such solutions to emerge over the next couple of years, because without them, users will have to rewrite their dApp and Smart Contract code for each blockchain they want to interoperate with. That just isn't a good future value proposition and is a big obstacle to successful adoption.
DeFi provides the first good of example of plentiful composable blockchain dApps downloadable from a marketplace. (For example check out DeFi Prime for a list of readily available DeFi apps). But more is needed. Once we have off-the-shelf applications, low code development environments, blockchain portability, bug-resistant if not bug-free smart contracts, scalable and secure blockchain networks, AND regulatory clarity, sound business use cases will be much more easily developed and implemented. DeFi will play a major role in paving this road.

The network provides reliable tamper-proof inputs and outputs for complex smart contracts on any blockchain
Smart Contracts Require End-to-End Reliability. Smart Contracts provide the ability to execute tamper-proof digital agreements, which are considered highly secure and highly reliable. In order to maintain a contract's overall reliability, the inputs and outputs that the contract relies on also need to be secure. Some new Blockchain provide a reliable connection to external data that is provably secure end-to-end.

Founders And Executives Of Off-Shore Cryptocurrency Derivatives Exchange Charged With Violation Of The Bank Secrecy Act Arthur Hayes, Benjamin Delo, Samuel Reed, and Gregory Dwyer Flouted U.S. Anti-Money Laundering Rules
Audrey Strauss, the Acting United States Attorney for the Southern District of New York, and William F. Sweeney Jr., Assistant Director-in-Charge of the New York Field Office of the Federal Bureau of Investigation ("FBI"), announced the indictment of Arthur Hayes, Benjamin Delo, Samuel Reed, and Gregory Dwyer, charging the four with violating the Bank Secrecy Act and conspiring to violate the Bank Secrecy Act, by willfully failing to establish, implement, and maintain an adequate anti-money laundering ("AML") program at the Bitcoin Mercantile Exchange or "BitMEX." The case is assigned to United States District Judge John G. Koeltl. REED was arrested in Massachusetts this morning, and will be presented in federal court there. HAYES, DELO, and DWYER remain at large.
Acting Manhattan U.S. Attorney Audrey Strauss said: "With the opportunities and advantages of operating a financial institution in the United States comes the obligation for those businesses to do their part to help in driving out crime and corruption. As alleged, these defendants flouted that obligation and undertook to operate a purportedly "off-shore" crypto exchange while willfully failing to implement and maintain even basic anti-money laundering policies. In so doing, they allegedly allowed BitMEX to operate as a platform in the shadows of the financial markets. Today's indictment is another push by this Office and our partners at the FBI to bring platforms for money laundering into the light."
FBI Assistant Director William F. Sweeney Jr. said: "As we allege here today, the four defendants, through their company's BitMEX crypto-currency trading platform, willfully violated the Bank Secrecy Act by evading U.S. anti-money laundering requirements. One defendant went as far as to brag the company incorporated in a jurisdiction outside the U.S. because bribing regulators in that jurisdiction cost just "a coconut". Thanks to the diligent work of our agents, analysts, and partners with the CFTC, they will soon learn the price of their alleged crimes will not be paid with tropical fruit, but rather could result in fines, restitution, and federal prison time."
According to the allegations in the Indictment[1]: HAYES, DELO, and REED founded BitMEX in or about 2014, and DWYER became BitMEX's first employee in 2015 and later its head of business development. BitMEX, which has long serviced and solicited business from U.S. traders, was required to register with the Commodity Futures Trading Commission "CFTC" and to establish and maintain an adequate AML program. AML programs ensure that financial institutions, such as BitMEX, are not used for illicit purposes, including money laundering.
Despite those obligations, HAYES, DELO, REED, and DWYER knew by no later than in or about September 2015 that, because BitMEX served U.S. customers, it was required to implement an AML program that included a "know your customer" or "KYC" component, but chose to flout those requirements. Indeed, each of the defendants knew of customers residing in the United States who continued to access BitMEX's trading platform through at least in or about 2018, and that BitMEX policies nominally in place to prevent such trading were toothless or easily overridden to serve BitMEX's bottom line goal of obtaining revenue through the U.S. market without regard to U.S. regulation. While knowing of BitMEX's obligation to implement AML and KYC programs because BitMEX was serving U.S. customers, HAYES, DELO, REED, and DWYER took affirmative steps purportedly designed to exempt BitMEX from the application of U.S. laws such as AML and KYC requirements. For example, the defendants caused BitMEX and its parent corporations formally to incorporate in the Seychelles, a jurisdiction they believed had less stringent regulation and from which they could still serve U.S. customers without performing AML and KYC. Indeed, in or about July 2019, HAYES bragged that the Seychelles was a more friendly jurisdiction for BitMEX because it cost less to bribe Seychellois authorities - just" "a coconut" - than it would cost to bribe regulators in the United States and elsewhere.
HAYES, 34, of Buffalo, New York and Hong Kong, DELO, 36, of the United Kingdom and Hong Kong, REED, 31, of Massachusetts, and DWYER, 37, of Australia and Bermuda, are each charged with one count of violating the Bank Secrecy Act, and one count of conspiring to violate the Bank Secrecy Act, each of which carries a maximum penalty of five years in prison. The maximum potential sentences in this case are prescribed by Congress and are provided here for informational purposes only, as any sentencing of the defendants will be determined by the judge.
Ms. Strauss praised the outstanding investigative work of the FBI's New York Money Laundering Investigation Squad, and the assistance of the FBI's Boston, Milwaukee, and Minneapolis Field Offices. Ms. Strauss also thanked the attorneys and investigators at the CFTC for offering their expertise in the development of this investigation.
The prosecution is being handled by the Office's Money Laundering and Transnational Criminal Enterprises Unit. Assistant U.S. Attorneys Jessica Greenwood and Samuel Raymond are in charge of the prosecution.