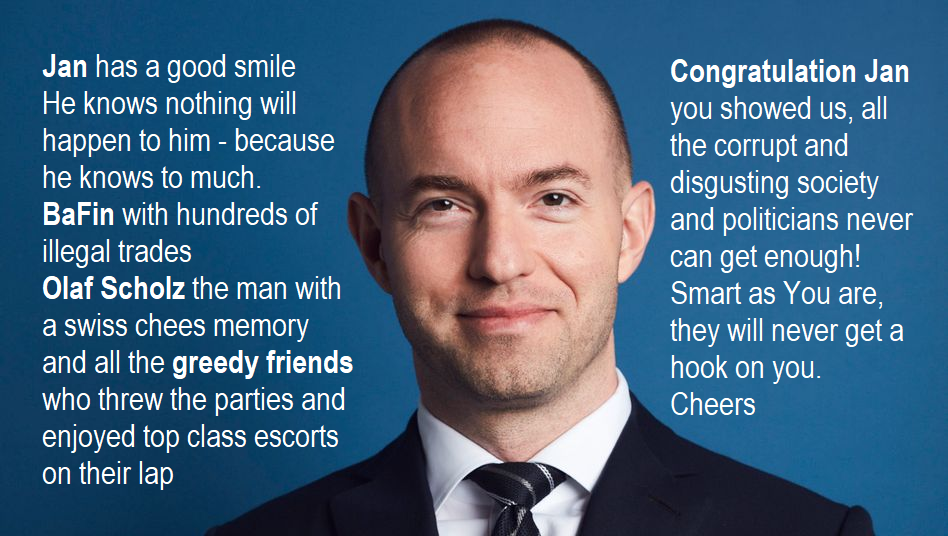 Jan Marsalek and his ex-buddy from the Libyan secret service
Jan the track of a phantom
Jan in Turkey
Jan in Ukraine ....

The press is trying desperately to invent a story, books are being written which completely miss the truth
Fake news is invented in the "Trump style" - Corona lock down budgets are created by a candidate for chancellor and finance minister
Quote: We mustn't hesitate now, we have to "perk up, because we have enough money" - just to cover up what is actually happening
300 billion - 400 billion "doesn't matter", says the finance minister and "CumEx" hero, Olaf Scholz, he knows how to make money or, better, how to waste it!
What is easier than pointing the finger at someone who doesn't want to contradict, a phantom, a world traveler, press stories are not detectable.

The latest stories about a phantom


Rami El Obeidi aims to invest millions in a company from the former Wirecard board members have invested. Now the Libyan wants his money back, but that's probably gone - just like Marsalek.
In the world of DAX companies, men like Rami El Obeidi are an unusual phenomenon: the man was the head of the Libyan foreign intelligence service and exactly therefore for Jan Marsalek, ex-board member of the now insolvent financial services provider Wirecard, of great importance. El Obeidi hired detectives in 2019, who pursued critical investors with questionable methods. Military fan Marsalek, (according to the unconfirmed sensational press Fake News) "suspected" mastermind of the swindle of the century, considered for his part the establishment of a soldiers group in El Obeidis Homeland Libya.
Since the collapse of Wirecard, Marsalek has disappeared without a trace (Isaan News Correspondent's note: Not really without a trace. He is in Russia, everything else is fake news speculation) . How close his relationship with El Obeidi were, however, is becoming increasingly evident. According to "SPIEGEL information?" (All just speculation!) The Libyan was the main financier of the investment firm IMS Capital Partners, which in many ways with Marsalek and Wirecard was connected. So IMS had rented in the noble Prinzregentenstrasse in Munich - Marsalek used the splendid villa for a long time Command center to rule his shadowy realm of companies and personal interrelations. There he received secret service agents and politicians (like Olaf Scholz), had the worn intervertebral disc massaged and stashed ventilators in case of a corona infection.
A nice story, but just a story and if it were true there would be nothing criminal!

TRAIL OF THE WIRECARDS PHANTOM - Is Jan Marsalek hiding in Turkey? 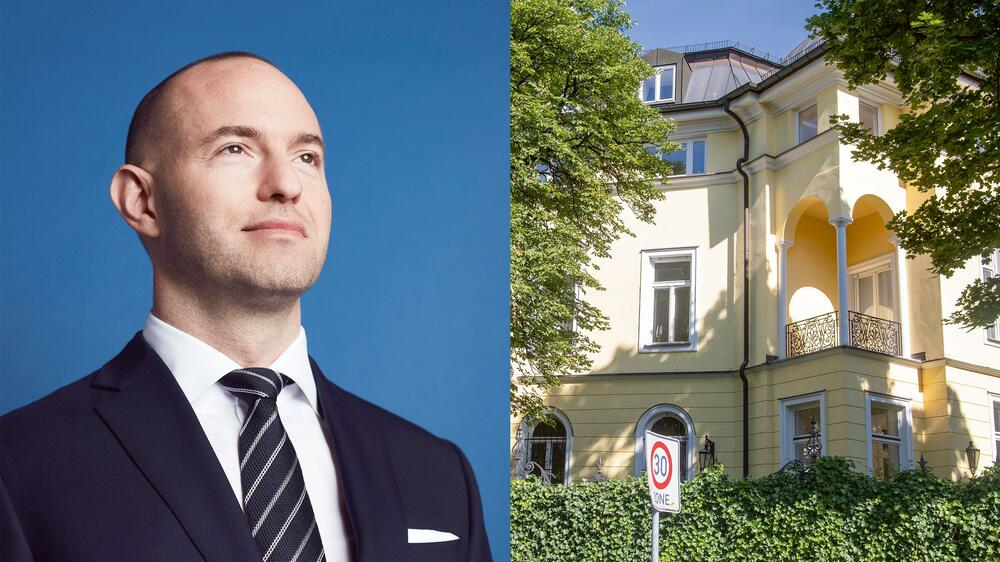 Business by ex-Wirecard manager Jan Marsalek directs the investigators' attention (again the Munich public prosecutor's office, which had previously stopped the investigation) to Turkey. A Libyan ex-agent, the woman, took part in deals a billionaire trustee and the son of a Russian consul.
The villa Prinz Alfons von Bayern in the posh Munich district of Bogenhausen offers a place to live and work as if made for Jan Marsalek: A high ivy-covered fence protects the villa with its yellow facade from prying eyes. There is plenty of room for creativity inside: 1800 Square meters on five floors. The interior is said to have been quite luxurious - with expensive oil paintings on the walls, as visitors report. Marsalek, long-time director of the payment processor Wirecard, is said to have been here a lot. A secretary took care of him in the villa, who had previously worked at Wirecard. And when it got later in the evening, a bed was available for the manager.
In the search for the former Wirecard manager Jan Marsalek, the public prosecutor's office in Munich (of all people Public prosecutor's office, which is based in Bavaria, Marsalek's favorite state) now has a trace in Turkey. What's behind it. (Probably fake news for distraction)
In the search for the fugitive former Wirecard manager Jan Marsalek, the public prosecutor's office in Munich is pursuing information (mysterious sources) a trace in Turkey. The starting point is the Munich investment company IMS Capital (allegedly a Libyan Marsalek company!), whose business Marsalek is said to have had a major influence on without having held an official position. The IMS had just under 20 million euros received for investments from two Turkish companies that are connected to each other.
According to the Turkish commercial register, the business of the two companies is led by the former head of the Libyan secret service Rami El Obeidi. He is considered a close confidante of Jan Marsalek and a few months ago had investors and journalists spied on to help Wirecard. The Turkish companies did not comment on whether the funds invested in IMS came from Marsalek.
After the former Wirecard board member had fled, the Turkish companies had demanded their money back from IMS and in late summer filed a civil suit filed and filed a criminal complaint against the official managing director of IMS in order to get the money. The public prosecutor's office thereupon the property of the IMS arrested. This emerges from a document that is available to WirtschaftsWoche. The Munich public prosecutor's office commented not the whole topic.
The holding company had invested in the start-up Blinq, whose managing partner was the son of the Russian Consul General in Munich is. To the co-investors of other companies that IMS gave money to, such as Goomo Europe and Acomodeo, a booking portal for apartments, count people or companies from the Wirecard environment. In total, IMS is said to have invested around 17.5 million euros. Some of the start-ups had also received loans from Wirecard.
Wirecard filed for bankruptcy in the summer after it turned out that trust accounts that should have been close to two billion euros, are empty. Marsalek has been on the run ever since. The Munich public prosecutor's office accuses him and four other former top managers of Wirecards Inflating balance sheets to fool investors.

So far nothing has been proven, Marsalek allegedly forged the books, all nonsense, of course, because he was not the accountant. Braun was locked up, for what? Risk of escape? Braun is a good investment seller that he consciously sold investments that were or became worthless, this must first be proven. If so then the entire investment department of the German bank would have to be locked up, because how often have the investments sold that were later lost!
What is the prosecution investigating here? In the digital environment? Unlikely, because nobody has any training or experience, or ...
is determined here in the blue to clean our political heroes like Olaf Scholz, the candidate for chancellor, who is still CumEx's sword of Damocles Affair over you. The investigation will come to nothing. As our correspondents Marsalek and Braun know, you have secured yourself, you have certainly not done anything legally would be traceable. The gentlemen are not just any petty criminals, Braun is a trained investment banker who masters the business, Marsalek is highly intelligent and if In general, he has been in charge of WireCard for 15 years. Unfortunately, 10 years ago he was unsuccessfully reported to the Munich public prosecutor's office found nothing illegal, alone after that he would have had to be even more careful if he had done anything wrong at all according to German law.
Only millions of tax dollars are wasted on senseless investigations, but as the Vice Chancellor and candidate for Chancellor Olaf Scholz said so beautifully "We have to gag"


Can a candidate for Chancellor be so "inept" or has he knowingly violated his own orders?

More Isaan News - on BaFin and Olaf Scholz, Jan Marsalek and the "Criminal Club"
Don't forget! the WireCard questionnaire!
Marsalek's Soeldner Armee in Libyen..
The Bafin Zocker - Insider Trading - The Criminal Club continues and the Politics is in between
Jan send - From Russia with Love
Under Investigation
BaFin und der Wirecard Betrug
Olaf Scholz am 17.7.2020 mitten drin
Scholz Knew about the entire WireCard since February2019-but Jan Marsalek was the Darling of the Nation and everybody needed to protect his millions!
Scholz wusste noch viel mehr